A SPECTACULAR DINNER AT THE MANCHESTER TOWN HALL

A SPECTACULAR DINNER AT THE MANCHESTER TOWN HALL

We held our first northern meeting of the Society in Manchester on September 28th in the magnificent setting of the Mayor’s Parlour, designed by Alfred Waterhouse who also designed the Natural History Museum and the National Liberal Club (where I would personally love to hold a meeting of the Bessemer Society to enjoy its magnificent architectural self-confidence).

We chose Manchester to extend the Bessemer Society’s reach northward so it does not become just another ‘network’ serving the Golden Triangle of London, Cambridge and Oxford; and to build links with local institutions and agencies. This worked out well as we are now discussing the formation of a ‘Northern Chapter’ of the Society; and secondly, we joined up with the North West Business Leadership Team (NWBLT), which gave us better access to the local business and government communities.

What the NWBLT said about the event here.

Our theme for the evening was, ‘Can the northwest be a materials powerhouse, again, based on advanced manufacturing?’ The name, Northern Powerhouse, evokes a powerful image of growth, so the question we wondered was how far was this true, or just political hyperbole?

Clearly the NW had been a powerhouse. We heard in fact that the area between Liverpool and Manchester (Cheshire and Warrington) forms the largest manufacturing cluster in the UK. Still, there is a feeling that many of its impressive assets are ‘ex-growth’ – although manufacturing is starting to hit its stride again, as one of our members pointed out who had seen an EEF report that morning that the UK had climbed to 10th place in the World Manufacturing Output tables. The problem is that manufacturing is ‘difficult’.

The negative sentiment towards manufacturing in the City of London was expressed to me by the MD of one of the companies due to attend. His company, Magnesium Elektron, is part of the Luxfer Group. The companies in the group had passed through several owners, including ICI, Alcan UK, and then Alcoa. The assets were then bought by a management team and a private equity firm. In 2012, Luxfer Group listed on the New York Stock exchange and one of the reasons given for listing in the US rather than in the UK was that there is “more appetite” for mid-sized manufacturing and technology companies in that part of the world.

What a shame because in 2016 the company started supplying first commercial batches of a new magnesium material (Synermag ®) to a German company, Biotronik AG, which has the exclusive right to use one of the Synermag ® materials to manufacture bioabsorbable cardiovascular scaffolds. Up to now Magnesium’s main customers have been in aerospace industry. In the future, the healthcare sector could be significant. It’s vision is to be world leader in the supply of bioabsorbable metallic materials. This is a Bessemer-scale vision exactly of the kind the society supports and encourages. Since Magnesium is based in Greater Manchester this lends itself to the story that seeds are sprouting in the NW.

The bioabsorbables business has been driven by Magnesium’s managing director, Graham Wardlow, for the last 10 years, which is a reminder that people are key. Another key person in this respect is Dr Nigel Pickett, the CTO and co-founder of Nanoco Technologies plc, which was formed as a spinout from the research labs of Prof Paul O’Brien of Manchester University. Nanoco can fairly be said to be the University’s most successful spinout though its full promise is still to be realised.

Clustering is one of the most important ways in which a region builds up a ‘movement’ or quantum. Cluster has been defined as a place where you don’t have to move house to move jobs. The materials sector is certainly a cluster in the NW by that definition.. I intend to write a feature about the new materials companies sprouting in the region in the ‘inside:technology’ journal. If they achieve their potential, the northwest would certainly be known as an electronic materials hot spot.

In a meeting with a focus on materials, in Manchester, thoughts inevitably turn to graphene, the wonder material. At our dinner however it was the elephant in the room because it didn’t get a mention. Why so? My own feeling is that it is overhyped and Manchester cannot claim, yet, very much for all the money spent to create ‘Graphene City’. It has probably benefited too much from
top down investment.

For a graphene cluster to form companies have to want to start up in the vicinity of the university. That hasn’t happened sufficiently. Fortunately, there are some entrepreneurs locally who are using their own networks, all over the world, more or less bypassing the University. At least Manchester has established a graphene brand, which helps marketing, as in Cambridge, what it needs is a similar entrepreneurial drive of individuals to put substance to it. I am pleased that some of those entrepreneurs are our members.

The region needs more Robin Saxbys one could cheekily add. Success, Robin told us, is about looking outwards, focusing on your strengths, turning your enemies into your friends, and making a difference primarily globally, which, as a by-product, helps the local people and economy. When he joined the newly formed ARM as CEO, he declared ARM would be the global standard. During his talk he handed out a copy of the first brochure that ARM published to confirm that from the very beginning the focus had been: ‘ARM is going to be the global RISC standard’ and that ‘Partnership is in our DNA’.

His inspiring talk was abetted by the first speaker, Nick Earlam, who ended his talk by showing us a short clip from a video entitled, Believe – that everything is possible. Nick is the CEO and Founder of a Liverpool company, which is building a vertically integrated cotton to textile supply business across Africa.

To these inspiring speakers we give many thanks for making the dinner so special. The evening wouldn’t have been possible without the support of the NWBLT, or financially comfortable without our sponsors (Clarke & Willmott and MetamorphicPR). Nor would it have been possible without the enthusiastic attendance of our members, inside and outside the NW region. Among these, a big thanks to Nigel Salter, one of our foundation members, who started the ball rolling by making many of the initial introductions in the NW. Now we are hoping a self-sustaining momentum will lead to the establishment of a northern chapter. We will update. 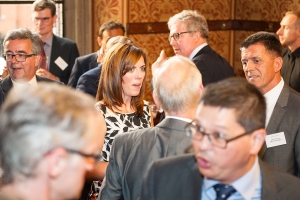 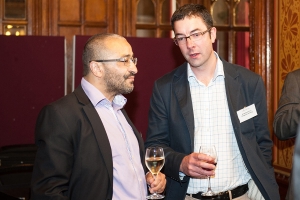 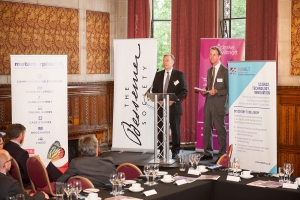 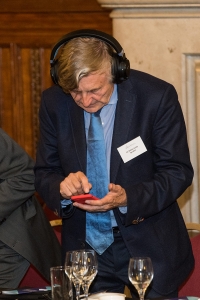 Thank you all, and see you next year