Tokamak Energy: Replicating the power of the sun

Tokamak Energy: Replicating the power of the sun

David Kingham, one of the founders of Tokamak Energy, describes the challenges of delivering commercially-viable fusion energy by 2030

It is hard enough for any science and engineering-related organisation to bring advanced technology to the market. But when striving to establish a business based on the immensely ambitious aim of providing an endless supply of clean and abundant power, forever, those challenges are magnified many times over. 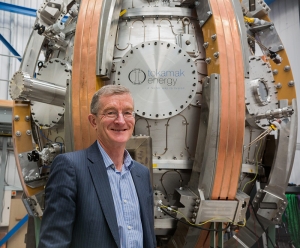 David Kingham, one of the founders of Tokamak Energy, with the ST40 fusion energy device.

That is the enormity of the task facing David Kingham, Executive Vice Chairman of Oxfordshire-based Tokamak Energy, one of the world’s leading fusion energy ventures. Ten years ago, he started to build a team of scientists and engineers trying to develop a scalable fusion power plant based on spherical tokamaks in conjunction with high-temperature superconductors. During that time, enormous technological strides have been made. But despite the progress made, many obstacles still need to be overcome.

“We are close to achieving fusion conditions, and I believe we will have a device capable of putting energy into the grid by 2030,” he says. “But this is no instant-return business. We have needed investors who take a long-term view and believe in our vision.”

So, what is fusion? And why is it so hard to achieve? Fundamentally, it is about recreating the process that powers the sun – but under controlled conditions on earth. This, theoretically, can be achieved by joining together small atomic nuclei to form larger ones which release energy. The fusion process involves forcing together positively-charged particles that ordinarily repel each other, so it can only happen at extremely high temperatures – more than 100 million degrees Celsius – trapped inside a tokamak device.

Fusion is the ideal energy source because it is safe, the fuels (primarily two isotopes of hydrogen, deuterium and tritium) are inexhaustible, and the reaction does not produce any carbon dioxide or long-lived radioactive waste. With such favourable performance characteristics, the race is on to prove fusion technology, thereby providing the world with plentiful, cost-effective and clean power – forever.

At Tokamak Energy, a spin-out from the internationally renowned Culham Laboratory, the team of scientists and engineers have spent the past decade refining the design of a compact and scalable tokamak. “The breakthrough came when we tested our first batch of high-temperature superconducting magnets,” says David Kingham. “These magnets are required to produce the extremely strong magnetic field that contains the plasma inside the device. The stronger the magnetic field, the better opportunity to get to fusion energy production conditions.”

In addition to developing high-temperature superconducting magnets, Tokamak Energy has built a series of prototypes, incrementally improving their performance each time. The latest version, the ST40, has achieved a plasma temperature of 15 million degrees Celsius – hotter than the core of the sun. The plan now is to demonstrate ST40 as the first privately-funded fusion machine to achieve 100 million degrees – the temperature required for fusion.

“That milestone should be achieved in 2021,” says David Kingham. “Then, we aim to have a prototype power demonstrator operational by the middle of this decade, capable of producing tens of MWs of fusion power: no-one has ever done that in a controlled fusion device. By 2030 we plan to be ready to put energy into the grid.”

However, David Kingham is under no illusions about the scale of the task still at hand. Technically it is feasible, for sure, but it will require significant levels of funding over the long-term, he says.

“So far, we have raised just under £120 million of private investment, which is pretty remarkable. However, many investors are not interested in fusion because it looks a long way off. We appeal to a small subset of investors – primarily from scientific or engineering backgrounds – who understand the challenges we face. These people like to see clear progress against specific milestones. They are tolerant of technological uncertainty, so long as we have a plan to address that by prototyping quickly and learning fast.”

Additional investment has come from the UK and US governments. The ST40 has been widely recognised as one of the world’s leading Tokamak devices, and that has attracted attention from all over the world. “We have won several UK Government grants and funding from the US Department of Energy. There has also been collaboration with the University of Tokyo, supported by the Japanese Government. International collaboration is essential.”

The power of people

People are also vital to the success of Tokamak Energy’s work, and being based in Oxfordshire is an important factor when it comes to recruiting the right sorts of people. The area has a long and distinguished history in fusion research and technology commercialisation, and it has also emerged as a hotspot of activity in superconducting magnets, with Siemens Magnet Technology catering for a significant percentage of the world market for magnetic resonance imaging magnets.

“Recruiting the right calibre of scientist or engineer has not been too difficult. The challenge, of course, is retention – and we have found that breaking down our milestones into a series of intermediate goals acts as a good way of keeping enthusiasm high,” he says.

Longer-term, David Kingham has his eyes fixed firmly on that 2030 ambition, ensuring that nuclear fusion becomes a commercial reality. This would provide the world with a crucial clean energy solution that could play a central role in the fight against climate change.

“We need to prepare for climate change now, rather than regret later,” he adds. “Climate change is a global threat, and when it comes to technology, we need some horses in the race. Fusion could be a huge contributor to cleaner energy production – so we have to keep up the effort to make it become a reality.”

Inside the tokamak, where plasma temperatures could reach 100 million degrees

Tokamak Energy and the Bessemer Society

Although David Kingham founded a company in a highly specialised sector, he has always found real value in mixing with other founders and entrepreneurs in the field of science and technology.

“That is why I have always attended Bessemer Society networking evenings,” he says. “There is always so much to learn from others in the hard-tech sector. There have been some fantastic Bessemer Society evenings with speakers from companies such as Renishaw and Rolls-Royce. But it has also been fascinating to learn of more local success stories from companies such as Oxford Nanopore.”

The spirit of innovation encountered at Bessemer Society meetings translates to the work at Tokamak Energy. “We now have a dedicated employee looking at spin-off technologies,” he adds. “Superconducting magnet technology could play an important role in other areas such as proton beam therapy and high field scientific instruments, so there are possible areas of expansion in the future.”