The purpose was to bring together a range of senior executives involved in developing and promoting a hydrogen economy in the North West. Liverpool is building a powerful case for government support led by our partners at the dinner – the North West Business Leadership Forum, Peel Holdings and the Liverpool City Region Combined Authority.

The venue reflected the period in Britain’s mercantile history when Liverpool was the dominant port trading with the New World – an impressive late Georgian building with enormously high ceilings and doorways. When the Queen is in town it is where she is entertained. 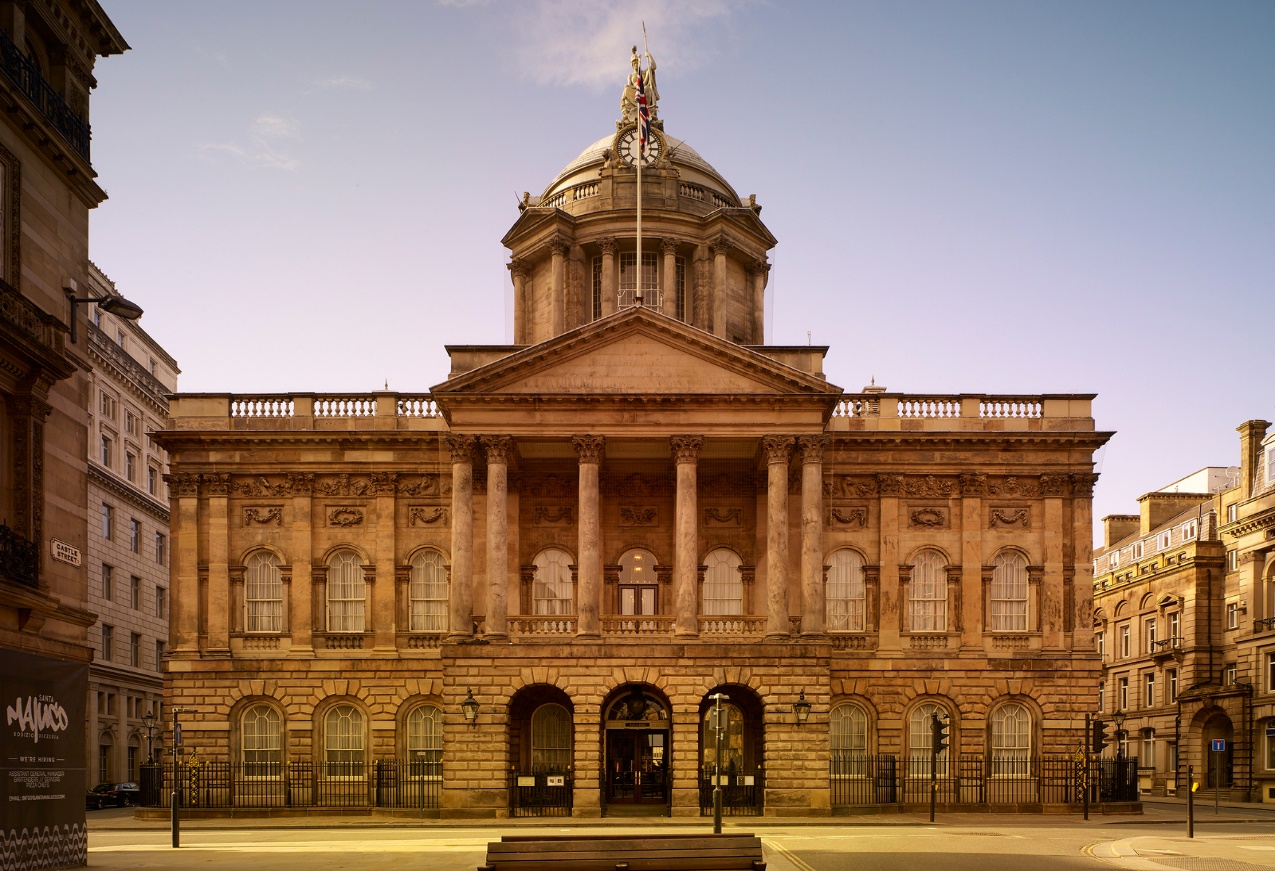 Liverpool Town Hall. We enjoyed most of the upper floor.

Amanda is Chair of the UK Hydrogen and Fuel Cell Association and the Managing Director of a local start up. ULEMCo, which converts diesel heavy goods vehicles to hydrogen fuel. This gives her particularly good insight into all aspects of the hydrogen value chain of how to convert high tech innovations into commercial reality. 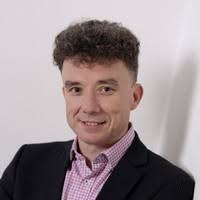 Director for Network Strategy and Safety at Cadent Gas which gives him a very broad remit across the UK. In his capacity as responsible for network strategy he is helping Cadent Gas to prepare for a low carbon future in which the role of hydrogen gas is a foremost priority. 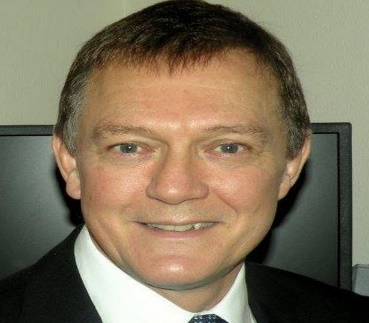 Commercial Strategy Manager at Peel Gas & Oil, which is part of Peel Holdings, the largest industrial property owner and developer in the north of England. In the North West it owns key assets which could form the arterial network for hydrogen transportation, including Liverpool Docks and the Manchester-Liverpool Ship Canal.

Self-intros take place in a separate room and provide the opportunity to find out the kind of companies attending and the important things members and guests are doing.

Brendan Bilton: A serial entrepreneur, based in Liverpool. Brendan has been CEO of several companies, including ACAL Energy, which developed a novel fuel cell system. Brendan is a member of the Bessemer Society and served as our main Liverpool link for the dinner.

Andy Creeth: Andy was one of the co-founders of ACAL together with Amanda Lyne (the letters of their names). He is now a lecturer at the University of Chester and the CEO of AC Chemicals Systems which is developing a completely new method of electrolysis.

Ben Todd: Ben is originally from Liverpool, but his company, Arcola Energy, is based in London. It has secured the contract to convert Liverpool buses from diesel to hydrogen.

Carl Arntzen: CEO of Worcester Bosch, the largest home and commercial boiler company in the UK. Despite his German name, Carl points out he is 100% British, not transplanted by Bosch in Germany after they acquired Worcester. The company is in the vanguard of developing hydrogen fuelled boilers in the UK.

Dave Horton: Chief Engineer of start up train manufacturer, VivaRail, based in the Midlands. Despite only being formed in 2012, VivaRail is already building electric and hybrid trains for qualification by customers.

Mike Lodge: CEO of Arvia since 2013. Arvia based in Manchester has a novel method for the reduction of hard-to-treat organics, micropollutants and colour from water and wastewater streams.

Paul Warwick: Paul is the major shareholder in Powerhouse Energy Ltd  which has licensed Waste2Tricity, a company he is assisting to build a plastics recycling facility on a site owned by the Peel Group outside Liverpool, with the aim to generate heat and power to the grid.

David Smith: Director of Central Research, Rolls-Royce. Dave is the eyes and ears at Rolls-Royce scanning for Future Tech.

Jon Beasley: Director Technology and Projects at the Advanced Propulsion Centre, which promotes and supports investment in Electric, Hydrogen and other low carbon fuel solutions.

VIEW OF SELF INTRO TALKS 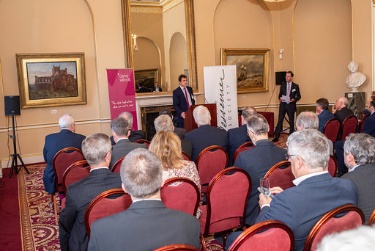 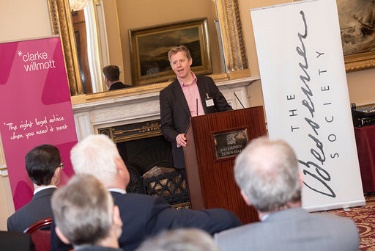 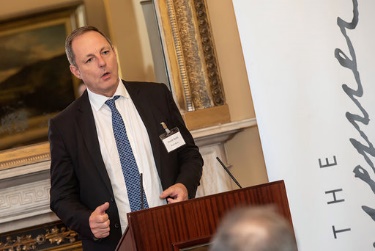 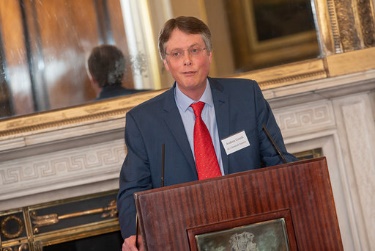 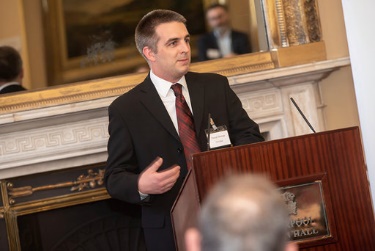 After the Self-Intros the networking continued until dinner. 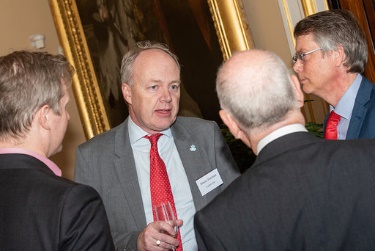 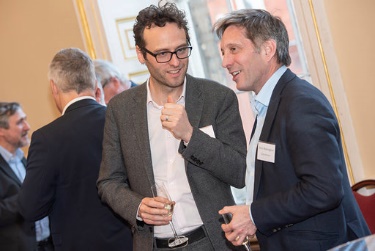 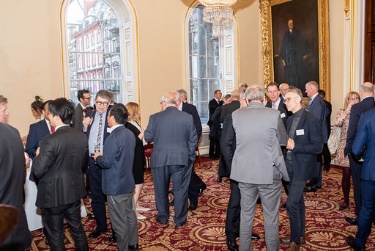 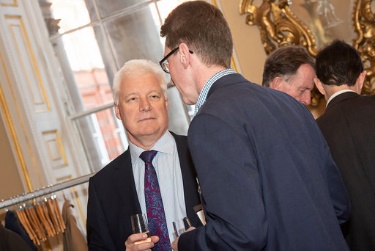 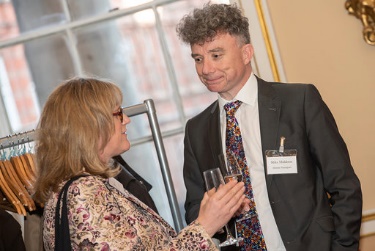 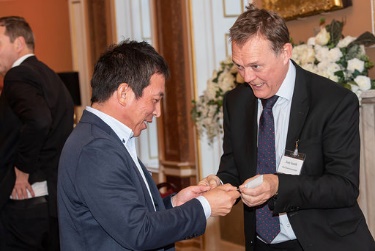 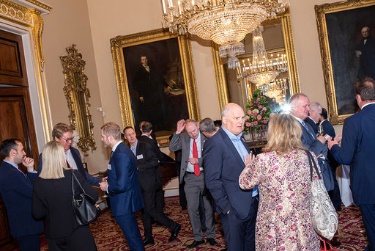 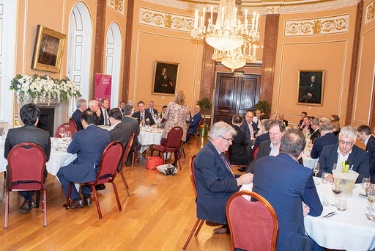 Late evening sun pours in through the high Georgian windows

The premise of the dinner was that the opportunity to establish a Hydrogen Economy in the North West has arrived for reasons which include:

To give an example of how Climate Change is influencing government policy, Mike Muldoon told us how the former minister for transport, Jo Johnson, gave a challenge to the rail industry to decarbonise rail by 2040. Because the operational life of a train is around 35 years this is a significant challenge. Alstom was responding by developing the first hydrogen trains in public service. The low carbon challenge meant the elimination of diesel trains in 20 years after the past 70 years of development.

Making a transition to a low carbon economy is a chicken and egg problem – there isn’t demand until there is the promise of enough supply. Building the supply infrastructure is extremely costly, so government has to provide the leadership and initial financial support to pump prime it. Amanda Lyne pointed out too there also needs to be working examples of large scale hydrogen facilities, so that industry and investors have confidence to invest in commercial-scale facilities.

All speakers mentioned the vital necessity of communicating clearly to government the importance of hydrogen in order to secure the necessary level of support for pump priming the hydrogen economy. The public too have to be educated. This is not for the first time, as the gas industry converted from town gas to natural gas 50 years ago. The shift to hydrogen would be less complicated because the gas pipeline network already exists.

Strong leadership is being provided by the North West Business Leadership Team (NWBLT), led by Emma Degg, who partnered with the Bessemer Society to organise the dinner. The NWBLT is a body representing the largest companies and organisations in the North West. It has formed a group specifically to lobby government in favour of hydrogen in the North West. It argues that the region has the potential to be one of the most advanced low carbon industrial regions in the world.

The other problem the government has faced is how to support the development of a hydrogen economy at the same time as supporting the electrification of the transportation sector. Mike Muldoon gave an example of how hydrogen and electrification can co-exist in the rail sector where hydrogen trains are more efficient on regional and local networks, while electrification is the most efficient method for inter-city high speed trains.

Simon Fairman pointed out that the electricity industry currently depended on gas for base load, peak power generation and back up for renewables, and that 50% of the UK power generation capacity was from natural gas. He added that delivery of heat to the home is an essential service in times of cold/extreme weather. To put it in context, during the ‘Beast from the East’ weather event, the heat energy supplied to the North West was 31 GWh (peak hour) for almost all of the day. If this heat energy was moved on to the electricity grid it would require the equivalent of 10 Hinckley Point C power stations (and we still wait to see the first one completed!).

The UK economy still retains indigenous capacity in heavy industries, like Cement manufacture, Chemicals, Steel and Glass making, which makes hydrogen attractive as a low carbon energy vector linked to Carbon Capture and Carbon Utilisation (CCUS). Simon Fairman was passionate about the importance of retaining this capacity by using advanced technologies to decarbonise them rather than allow further “hollowing out of industry” by importing high carbon embedded materials.

The government is building up a proposal for CCUS which is considered essential to the deployment of a hydrogen network. There are four potential hubs under consideration: NW, NE (Teesside), Scotland (Grangemouth) and South Wales. Since there will be limited funding available all the speakers made the point that the North West has to fight hard to make the very best case for investment (both financial and political).

The case for the North West

The case in favour of the North West is the composition of its existing industrial base and infrastructure, including:

Befitting a dinner attended by many entrepreneurs, several voiced the opinion that rather than wait for government it was important to seek opportunities, using their ‘smarts’, as American companies do. The Peel Group, for example, have developed an area of industrial land as a location for low carbon energy generation, waste recycling and hydrogen production; Waste2Tricity is siting its first plastics recycling plant on the site. Another example is Arcola Energy, which has secured a contract to convert Liverpool City buses to run on hydrogen and is now establishing a manufacturing facility locally.

The best example of ‘smarts’ we heard perhaps is VivaRail, a builder of complete trains, which was only established in 2013. The company was set up by rail veterans, using a kind of Formula-1 fast track team approach. They have already built an electric battery train which is being trialled by one of the rail networks. The principal shareholder in VivaRail is an American industrialist, so that may help explain the ‘American smarts’ as well. It is the first example I know of where an American industrialist has backed a UK start up to help it reach its potential. It would be interesting to find out if there are others. For a Bessemer audience it makes VivaRail a definite company to learn from, so watch this space… 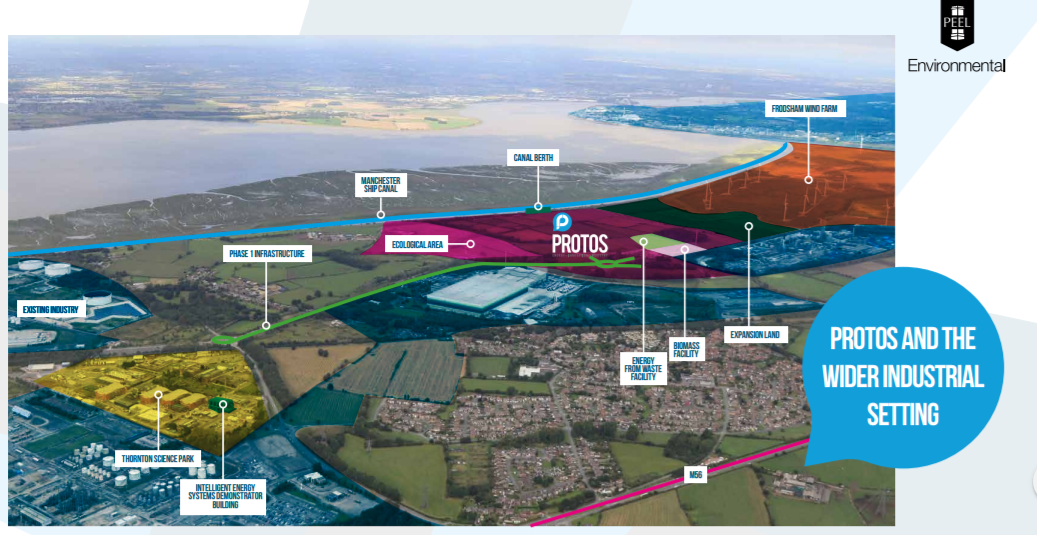 Our sincere thanks to our two sponsors who have been long terms supporters of the Bessemer Society. 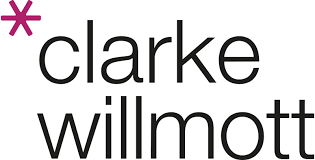 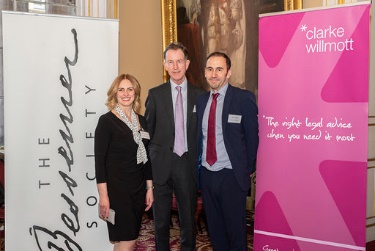